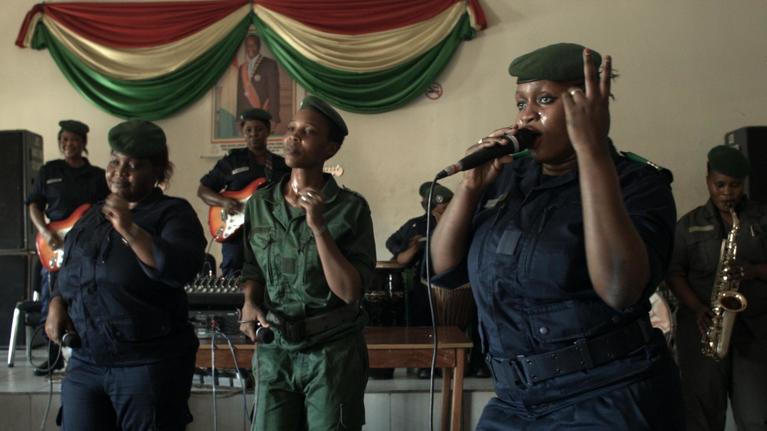 Sheffield DocFest is an international film and arts festival and marketplace, with a mission to spark imaginations and empower our capacity for change by celebrating, championing and debating documentary film and art as a collective form of engagement. In 2021, there is the 28th edition, from 4th to 13th june.

Fixed barricade at Hamdalaye crossing, directed by Thomas Bauer and supported by the CNAP for post-production in 2020, is selected for the competition, section "Rebellions" and first feature film.

On September 28th 2009, in Conakry, Guinea, security forces massacred 157 people at the Stade du 28 Septembre, the city’s main sports stadium. In 2018, filmmaker Thomas Bauer met a group of frustrated plaintiffs who set up rehearsals for the staging of a hypothetical trial, using performance to piece together the case as an investigative aid, and an act of catharsis.

Fixed barricade at Hamdalaye crossing will be followed by a live online Q&A with Thomas Bauer which will be live-streamed from the cinema to Selects.

The global pandemic of the past 15 months has shone a light on the unjust systems of power and rapacious forms of exploitation that define our contemporary world. With these inescapable revelations comes a clear and unambiguous need for rebellion. In an era that will be remembered both for an unimaginable force majeure, and a global reckoning with hierarchy and domination, mass movements and collective actions have been essential survival strategies, transmitted around the world largely through visual media. Widespread conversation about anti-Blackness, police violence, white supremacy and prison abolition, paired with crackdowns on protest in the name of public health, lead us to reframe contemporary resistance and historic struggles. The films in Rebellions illuminate cinema’s role in documenting – and tangibly contributing to – the myriad forms of resistance that continue to persist worldwide, pandemic or not.

Screenings in cinema and online