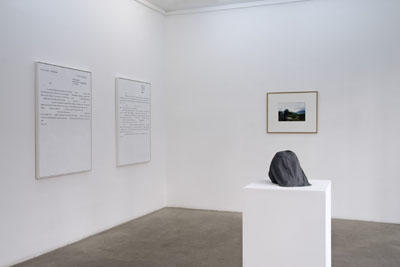 View of the exhibition For her at this moment, galerie frank elbaz, Paris, 2010. © Cedrick Eymenier

“The artist in the creation of a work is a voyeur of the studio. Works make themselves through a process in which objects or works are allowed to drift and collect dust. In fact, the objects could be seen like dust, shifting around the studio gathering time and eventually swept up and exhibited.” – Sean Edwards. Sean Edwards’ work often uses remnants of previous activities as base materials – found or borrowed objects, leftovers from other works and studio morsels. His exhibition, ‘For her at this moment’ presents a collection of new works that expand the artist’s investigation of the sculptural potential of the everyday to the performative aspects of the artist’s studio. Amongst scattered objects composed of traditional elements associated with the artists’ practice, Edwards’ work ‘Settled’, a pigment painted bronze hood, is a dismembered bust and self-portrait of sorts. Based on an earlier photographic work of Edwards at work en plein air, the hood has become a recurrent motif mythologizing the romantic notion of the artist. This notion, specifically of the anticipation and expectation of the artist, points to a self-reflexivity that Edwards has harnessed within this recent work. “On the relationship of the formal and conceptual in my work: the formal comes before the conceptual but is intrinsically connected to it. The formal leads to the conceptual. A work is considered/began/approached in terms of the formal. Through an investigation of the formal the conceptual arises.” – Sean Edwards. The suite of new text paintings investigate the studio-based activity of the artist. They operate both formally as monochromes with attention taken to the application of paint, and conceptually through the partly visible text printed upon the painting base surfaces. Reading the text we follow repetitive actions and activities, which can be associated with an artist’s studio practice, an application of paint, the addition of one sculptural component to another… These actions described in the partially obliterated texts are from observations of children, each intently rooted on their small incidental activities, seemingly unimportant and inconsequential, but ultimately intricate in the child’s understanding of the world and their position place and control within it. Seen alongside each other Edwards’ incidental sculptures, drawings and paintings all seem to point to this understanding of the delicacy between control and the incidental, and the delicacy of the playful. Of what is expected and what ultimately becomes a surprise.