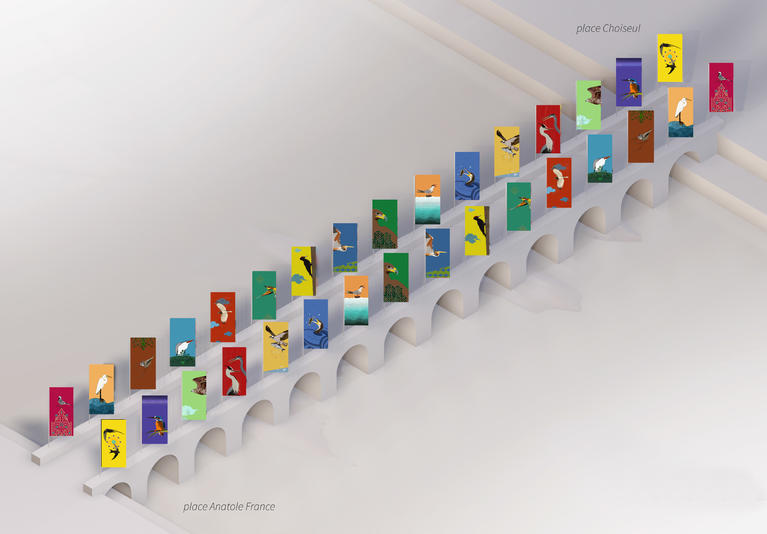 The idea comes from my never ending passion for birds! As you might already noticed, I have paited birds and made sculptures inspired by birds quite often.

I am very impressed and inspired by Ravens and use them alot in my Art. I wascurious to know about The Loire valley’s wildlife and made som researches.

I learned that The Loire Valley is actually a refuge for uncommen and unusual birds!

For me birds are symbol of freedom, open mind, wider and different views.

In Scandinavian mythology, The raven is an iconic and magical creature in the Viking world. It is a powerful symbol of war and is believed to be the eyes and ears of the chief Viking god, Odin. ... Odin has two ravens: Huginn ("thought") and Muninn ("memory"). They fly all over the world, Midgard, and bring information to the God Odin.

In Persian culture and mythology, different types of birds both real and imaginative (Griffin or Phoenix similar) and also a combinations of human body and wings have been used for several thousand years in architecture, objects, literature and works of art. These bird forms are usually called Homa or Simorgh. According to legends and folk beliefs, this bird is sometimes invisible and lives on top of the highest mountain in the country. It is also said that Homa never lands on earth and the person who manages to see this bird or even the shadow of it will live a happy life with a lot of wealth. Homa approaches the earth to help people in need. If you burn one of Homa's feathers, it appears and can answer all questions and solve any problem. To me it is the symbol ofeternal freedom that never disappears. Homa is for everyone who needs it.

For this idea, I have made a list of birds which are both native and migratory to Loire vally. The illustrations can be seen and understood in different ways.

They can be educational, they can create awareness for animallife and nature and they can be decorative.

In some of the illustrations we can see the bird completely while in others we find details, a part of the bird och even only a shadow!

I would like to work with bold and brave colors so the flags can be been easily and also create contrast. I want the flags to be Playful, simple, Lively, to create movement in the wind and to awaken memories and feelings.

I would like to simplify the forms and. My illustrations will present portraits these wonderful birds.

Maybe a simple form or a pattern appears in all flags or in some of them. These touches and details are my own additions.

To show my passion of being a part of, observing and enjoying the Loire Valley’s wildlife.