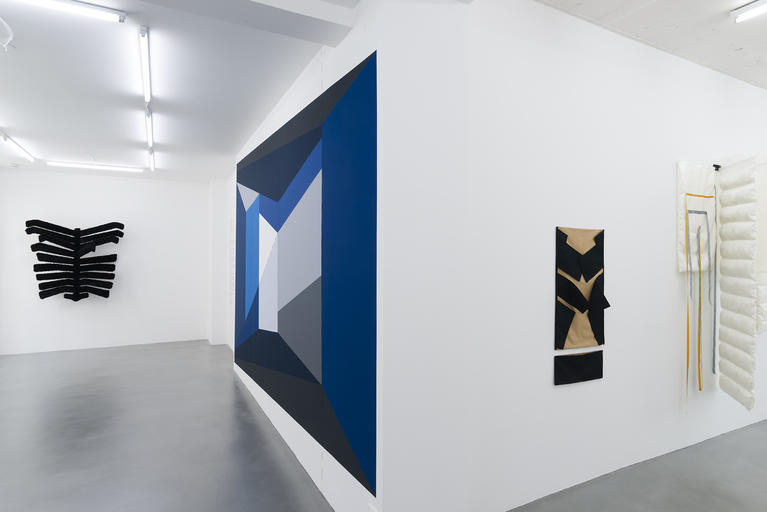 Two years ago, we said to ourselves: time for a new throw of the dice, let’s imagine a new way of working, and let’s start by doing what we’ve never done before.

The form of the result was not to be determined in advance.

We wanted to surprise ourselves by the techniques we used and the working processes; we wanted to decentre ourselves and grope forwards, learning as we did so.

We had to master working in a studio. So this was the opportunity to wonder: while using which medium? And which materials? What might a creative gesture be like, if it did not rely on our own language acquisitions?

We wanted to effect a transposition outside the film language that was dear to us. So the analogy we adopted was that of splicing (joining together two pieces of film) and sewing; editing – with the shock of one shot meeting another and creating meaning – and the assemblage of various fabrics, whose mingling, undefined by any pre-existing practice, questions usages.

Jersey, silk, cotton, velvet, linen, stitched, woven, extensible, with double layers; we observed and handled cloths, and we infiltrated their chain of production; choosing ends of lines, snapping up leftovers, or unearthing rarities. But, instead of following up the production to its destination for a particular garment, upholstery or everyday use, we misappropriated it, turning it into something “handmade” of our own, pending a descriptor.

We started weaving, sewing without a pattern, composing a typography, without a licence, trying to make the border between the intimate and social markers porous.

We caused disturbances by associating emblems, banners, garments, and coatings; we evoked the gesture of getting dressed and groomed, while comparing it with the idea of being shielded and affected.

With a contrasting effect between an enclosing form and an open one, the brightness, the harshness and the softness of material things, we gave rise to a caressingly close evocation of the symbolic thread running through our lives, varying from the waving of a flag or pennant, to marriage banns, here suggesting an uncertain ceremony, a kind of baptism, or else a coveted social rank; a confession, a game, a vow. Have I seen this correctly? Felt this right? Is this directed at me?

We sketched out a dramaturgy in dotted lines, pointing to roles. The human figure, now absent, slipped in between the pieces. An abstract form is a way to bring in the numerous layers of our social organism, without interpreting them unilaterally. We opted for a non-realistic, non-figurative vocabulary, whose forms and signs breathed in the open air, offering an analogy between the stuff we are made of and that animated underworld, which is peopled with our identifications and projections.

Orthographic projection is the name given to the method invented by Gaspar Monge for flattening a three-dimensional object into two, with the necessary indications for being able to put the object back into its three dimensions.

We made an analogy between this procedure and our work as artists, while broadening observations of the projection phenomenon, when we pass from one dimension (which can be mental, affective, structural or symbolic) to another. A “place” then becomes perceptible, where two contradictory rationales interact: one that distinguishes and differentiates, by asymmetry; and one that unifies and creates new syntheses.

So how do these projective mechanisms play on us, as split beings, made up of an imaginary and mortal corporeity, heady on regressive models, while aspiring to free ourselves from everything?

It is as if we had constructed in our studio a miniature set-up that evoked the uncountable dimensions of our social order: pomp and emblems, confessions and adornments, codes of representation and signs of intimacy. Then we “crushed” this system, by projecting our three-dimensional construction onto the two walls of a gallery.

We are presenting a series of pieces evoking the flattening of volumes, with the possibility to guess the potential content of these inseparable forms, bodies and decors, while offering a crushing shift, played with a soft and joyous anthem.