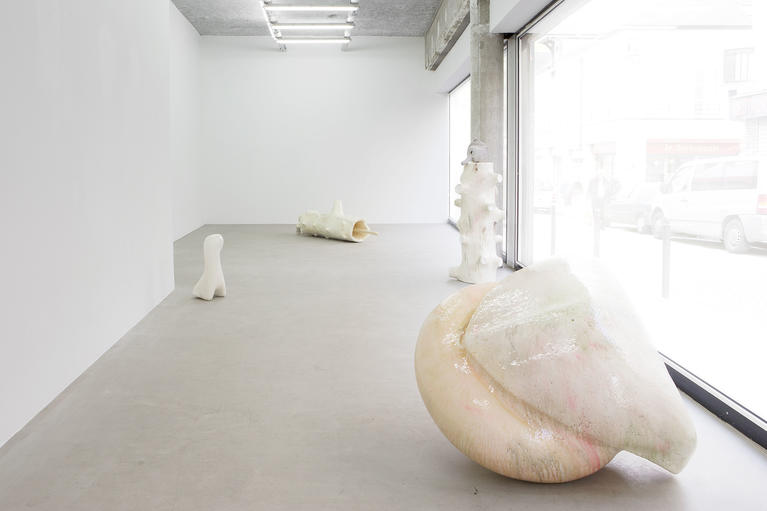 The works in the current exhibition No se como decir no se emerge from an investigation of the events surrounding the censorship of the Guatemalan play Corazon del Espantapajaros (1975), where art students from the Universidad Popular dressed in clown makeup and acted as policemen, soldiers, and government officials. The work so offended its audience that the director Rubén Morales received anonymous death threats, the playwright Hugo Carrillo exiled, and the entire theatre season was cancelled for that year. The playwright later reflected on this extreme reaction and concluded that the play’s intention was to provoke change but that severe consequences occurred because the theatre’s audience members were themselves members of the bourgeoisie. He noted that despite whatever revolutionary aspirations were behind the vision of the director and the art students who mounted the work, the play’s impact remained within a certain social group that naturally had the power to shut down voices of dissent.

Naufus Ramírez-Figueroa continues Carrillo’s observations of the divergent interests of the artists and the bourgeoisie by engaging with the dichotomies of expressing the provocative in a contemporary art environment supported by the status quo. Goya-esque tendencies can be found in works such as The Perils of Entertaining which employ the aesthetics of the commedia dell’arte actor’s mask as it lays upon a pedestal not unlike a butcher’s chopping block. Without the laughs appears to be a sculpture that is trying to hide within itself, but fails to do so. In the work Hidden in plain view a figure attempts to conceal himself in a hollow tree stump, but is betrayed by a thin long appendage that protrudes from the other end of the sculpture. The appendage functions as a probing reference to the lies of Pinocchio or the prosthetics of a clown.

Together, the works attempt to provoke the memory of the censorship of Hugo Carrillo’s play, yet fall short in this intention due to the distancing mechanism of time and the differing social context that sets the sculptures apart from the students’ legendary enactment. This dilemma of reference was recently contextualized for the Gwangju Biennale by curator Jessica Morgan through the concept of Tigersprung (Tiger’s leap), which «describes a spring into the past that breaks up the continuum of history by reactivating a historical event or idea for use in the present». Walter Benjamin framed the concept of Tigersprung by locating it within the fashion industries’ penchant for sourcing the past while simultaneously misappropriating historical aesthetics for contemporary consumption. Similarly, Naufus Ramírez-Figueroa attempts to quote a historical event, provoked by Carrillo’s iconic example as a victim of censorship in relation to his country’s history. He is, however, thwarted in his desire to replicate whatever revolutionary force might be presumed to have ignited the 1975 production of Corazon del Espantapajaros, via the contemporary conditions of his creative process and production.