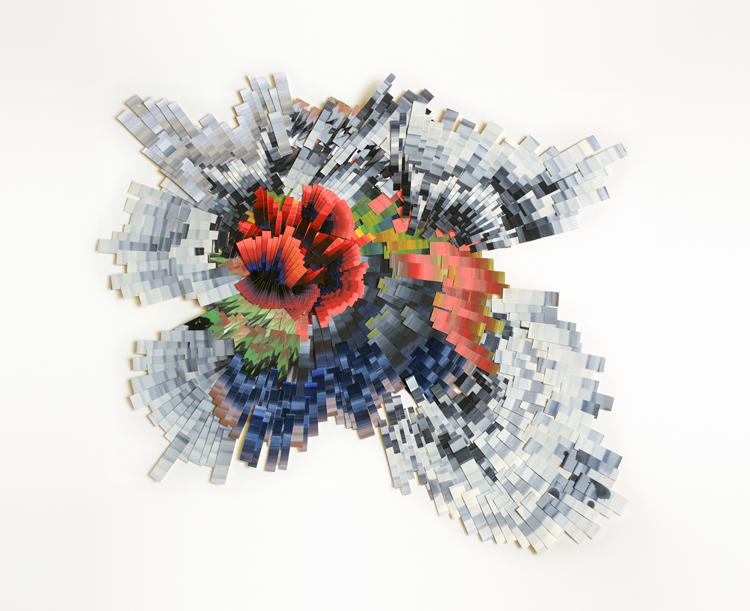 The exhibition’s title comes from a comment published on the forum of a virtual game, which goal is to reach Utopia - by the attribution of points for finding butterflies in desolated urban landscapes.

If the insect is the symbol of metamorphosis, from hatching to blossoming beautifully, the rainbow refers to an immaterial, splendid and fleeting reality, to a desire that cannot be fulfilled. It suggests a bridge between two elements of different nature such as the physical and spiritual worlds. Thus, “I found a rainbow butterfly once” convenes- in a poetic and simple manner- the singular instant, the experience, the memory, the dream...

The composition of a hormone that makes people love, a crystal structure and its parallel among the stars, deep web and mandalas: Lyndi Sales borrows from the scientific and technological imaging as well as from symbolic representations. She questions, juxtaposes, looks, dreams to confront fears and fascinations, marvelling and horror. Through her two or three-dimensional works, the artist pushes back the frontiers of the visible to reach a better comprehension of the world. Her exploration of social realities comes with a spiritual quest.

For years now, she has been finding some of her inspiration in the cutting-edge spatial research while also learning from Buddhist thinking. Navigating between microcosmos and macrocosms, between the tangible and the immaterial, a number of her works are looking to give shape to dualities such as light/obscurity, masculine/feminine, life/death. A desire for balance, visions and utopias or even other possible realms characterizes Lyndi Sales’ universe which is profoundly shaped by her environment: a highly-contrasted South-African reality where innovation and material deprivation live side by side.

Her language is the language of beauty, such as the captivating beauty of the butterfly that embodies the possibility of mutation.

Our relationship to the world starts in our own body. A “Primary tool”, its constitution determines our capacities to perceive and interact with the “exterior”. Sight, in all its functional and psychological complexity has been for a long time at the core of Lyndi Sales’ work that questions her own perception of and about the world:  functioning of the eye*, visions of cosmos**and society***, drugs and religion as ways to access a broader vision****. This need to see further probably comes from personal tragedy: the loss of her father in an unexplained plane crash, the theme of her first exhibition in France. Thus, In transit (2009) highlighted notions of fragility, chance and rebirth.

Life experience, a need or a fact are always at the origin of the artist’s artworks.

searching to know oneself

In its own way, the scientific world enables to see further, to fathom what escapes us.

A result of the conversations with researchers at the Texas A&M College of Engineering, the physical phenomenon of a plane passing through the sound barrier and the fragmented space left by its passage inspired Lyndi Sales to create the monumental mural work Chaos and flow, love and fear(2018).

The code of the human genome is the inspiration behind the Human genome tapestry, which composition in concentric circles recalls mandalas, symbols of the universe’s evolution and involution. The circle, a recurrent motif in the artist’s work, represents the entirety, the fulfillment, the unique, the resonance. Just as it suggests the links/connections between the big everything and the modest place human beings hold, between the rational world of science and the spiritual world.

The exploration of the link is also visible in the collages Pituitary gland and Oxytocin : I’m addicted to you. Respectively, “key body gland” and hormone that favours social interactions. The pituitary gland and oxytocin are evoked in a crystalline shape beaming with particularly luminous colours.

In large laser-cut cardboards entitled Love and fear, Lyndi Sales establishes a parallel between the areas of cosmic energies and those circulating between beings. She superimposes registers of quantum physics - gravitational attraction and expansion, matter and dark energies - to human feelings of attraction and repulsion. Matrix-networks with complex frames, sometimes organic, sometimes straight, dense or frail. The surfaces of the works are saturated with layers of many colours - as many strata of different emotions and their contraries.

One night, a dream inspired by a visit to the Paris Catacombs takes Lyndi Sales to a new world of Utopia, connectivity, love, sadness and abandonment. A transcendental experience or trip caused by a drug? Left puzzled, the artist questions herself and gives shape to dreams in an ensemble of hand-embroidered tapestries. (A place where I found moments of …: Catacomb dream map). Constructions, labyrinths, models and symbols are juxtaposed. This newly created cartography presents similarities with her series of drawings inspired by an aerial vision of transformations caused by the mining activities in South Africa. The Erosion drawings tell the story of the precarious destiny of the Zama-Zamas, illegal minors rummaging abandoned mines in the hopes of finding gold.

As for the eponymous work of the exhibition, it presents a weave where the central thread expands in winding lines. Free deviations, they evoke Internet browsing or virtual games where the browser /gamer ends up discovering things beyond their search field. Just like the unconscious in a dream, diving into the Internet can lead to shifts and surprising contiguities. Lyndi Sales reminds us that parallel worlds - virtual or dreamlike - are also fields of an expanded reality.

Going from the specific to reach the universal, Lyndi Sales explores fundamental structures and symbols through a diversity of cultures and fields of knowledge. The chosen shape, medium and technique carry as much signification as the subject matter.

Chance, hope, transformation, chaos, harmony, movement, observation, quest for love and infinity… Lyndi Sales’ rhizome-like work embraces very widely to show the impermanence and fragility of fundamental conditions. I found a rainbow butterfly once explores the multivocity of a whole and offers a unitary vision of existence.

Lyndi Sales has been widely exhibited for over fifteen years (United States, Europe, Australia, Asia and South Africa). In 2011, she represented South Africa in the 54th Venice Biennale.

In France, Lyndi Sales is represented in the collections of the FRAC Normandie Rouen and thecollection of the Société Générale.

Lyndi Sales has also created a considerable number of monumental commissions for private and public clients: Mandela stone installation for Norton Rose in Johannesburg in 2012, Satellite telescope for Cape Town University in 2013, an installation for Facebook (Johannesburg, 2017) and the mural work Chaos and flow, love and fear for Texas A&M College of Engineering (Brian, 2018).

During the summer 2014, her installation Audience was presented at the Bon Marché Rive Gauche, Paris.