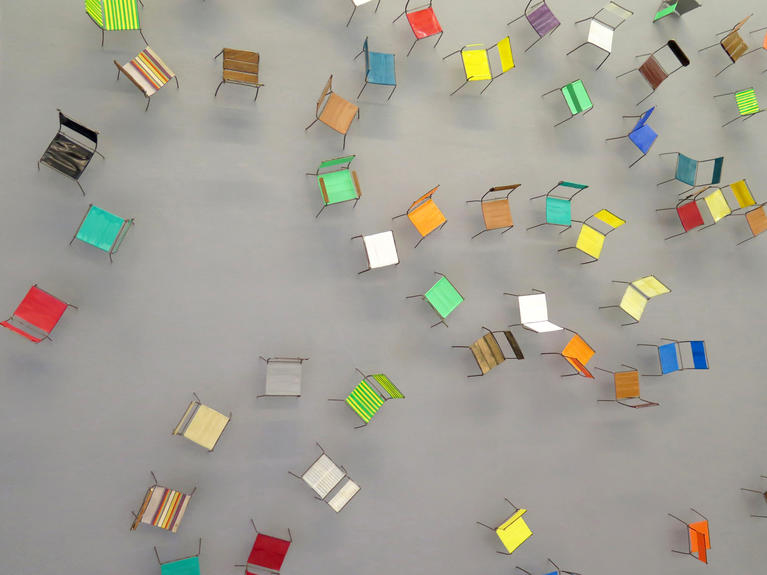 Frédéric Coché (Pont à Mousson, France, 1972) uses painting, drawings etchings to build artworks dealing with Human destiny ; For Art Rotterdam, the gallery will exhibit the big canvas ‘La plage’ (Beach) where besides the contrast between the peaceful family life, the baryards animals  and the ‘animated’ skeletons, Frédéric Coché introduces other reading clues : the bath towels are the colours of french flag, and they are alos like a glimpse to some famous artists like Buren or Viallat , then the coloured ballons could be quoting Damien Hirst spot or Baldessari dots of colour

He has works in Museums, such as Musée of Art and History, Geneva (Ch) Musée des Beaux-Arts de Nancy, France etc..

Jérôme Touron works with galerie la Ferronnerie since 1992, he will present an important New piece

Après la nuit, devant le ciel (After the night in front of the sky). The artist’s works could be considered as post-minimalist but the spirit he put in it give poetic touch, sometimes he likes to add touch of humour. His works are in important private collections, he also got a grant from the Krasner-Pollock Fondation.

Laurent Fiévet creates video editing from famous movies, such as the piece we will show at ART Rotterdam 2017, to which he sometimes add some elements, thus elaborating installations.

Although the titles of the montages echo the Brian de Palma Film Carlito’s Way, which proposed many returns to the work of Alfred Hitchcock, they chiefly introduce a reference to the character of Carlotta Valdes, whose painted portrait plays a key role in the scenario of Vertigo. Presiding over multiple links between fictional and pictorial worlds to the point of generating many figurative and temporal overlap effects, it invites the characters in the story and viewers of the film to make comparative approaches that are similar in nature to those instigated by the montages through combining cinema and painting.

Carlotta’way was exhibited at the re-opening of Musée Picasso-Paris (2014) after having been exhibited at Galerie la Ferronnerie for the 1st time ever.

‘…My work explores the relationship between nature and culture. In my artistic work I aim to study the methods, theories and concepts through which we approach nature in art and in science. As an artist I am attracted by the idea that when I am working in a rain forest I am a ‘visual researcher’.

Taking photographs in a field studio has become one of my most important working methods… t. …When the object has been taken out of its original setting - out of nature - it becomes special. The aspect of a white background that suggests scientific recording and documentation interests me.

These compositions in the field studio have also allegoric nature. For me photography is a medium, which in itself documents the transience of life…’

The singularity of her works has led Centre Pompidou, Paris to buy some of her works, besides many other private and public institutions around the world

Natasja van Kampen living and working in Den Haag, likes with her artworks to underline how power Interferes in citizens lifes, wether in the contemporary world or through quotations to the past.

Natasja van Kampen is constantly aware of the need for balance between good and evil.

During Long-term drawing projects, she explores the elusiveness and the insanity of power. Her drawings are sometimes three dimensional, and often of monumental large size.

She will be the the focus artist for Galerie la Ferronnerie at Drawing Now Paris 2017.