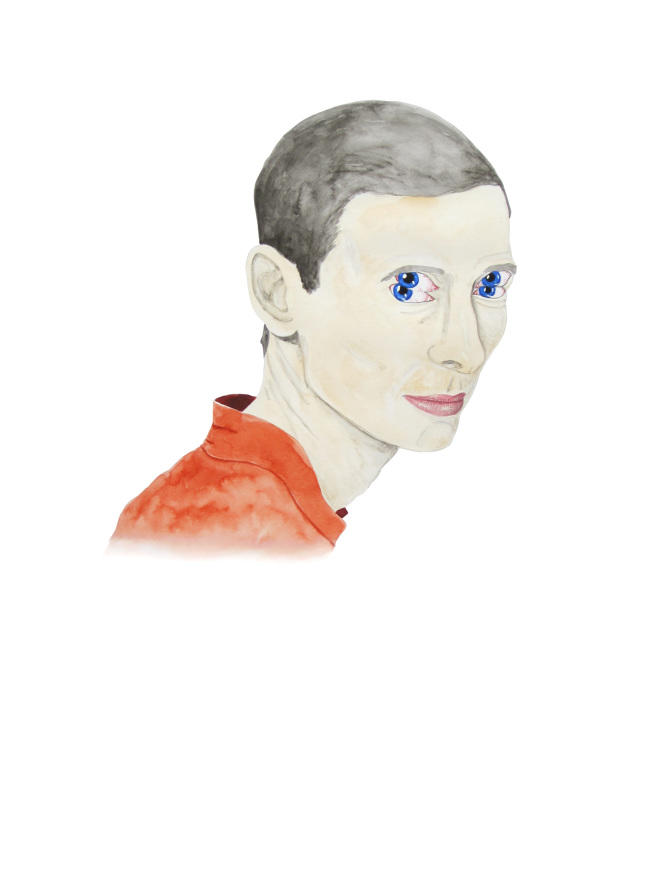 François Marcadon’s world is above all made up of sham. With elegant appearance, aesthetics intention, each of his works involves the bitter with the soft-sweet, by discovering under its sweetened surface a more disturbing phantasmagorical bottom. These fantasmatic images (alternately dream, nightmare or allegory) settle the personal mythology of the artist which offers a vision either dreamy or cruel, like his own laughter, omnipresent, about which we never know if it is sign of rejoicing or sarcasm.

The body as the main thread of which François Marcadon expresses the vanity and the uncertainty as to remind in the same movement its extraordinary plasticity - its metamorphic potential - and its unconditional finiteness - its mortality. Multiplying the formats, and taking advantage of the dissolving aspect of the paint (water colours, acrylic, ink), he graphically explores the polymorphism of the body whose diluted consistency allows all the fantasies.

Enhanced by a cheerful and almost childish pink, the color of the flesh doesn’t have to deceive: with its crudeness it brings the exposure of an embodiment of which humanity is beneficiary, but also victim. Dreamed life or real-life, organic and fantasized, could be thus linked to the figure of the Greek pharmakhon, quite at the same time remedy and poison.

So, when color is reduced to one black and undifferentiated silhouette, simply hidden in the shadow which takes the place of a surface, it is symbolically made the watchdog of a hearse, announcing its own end. Showing mad, wild or anxious body, François Marcadon states the images of a mechanism of unconscious projections which calls upon the irrepressible of the human desire. Just like the figural lyotardien, he reveals on surface these emerging affects by unforming bodies.

The series of self-portraits of the draftsman contains the same alarming cheerfulness. Indeed he shows ambiguous presence which aims to be not only discreet (drawings have no title not to influence the viewer) but also cynical. In his work, the burst of the body always congeals between threat and promise, as an explosive libidinal potential, with golden skin.