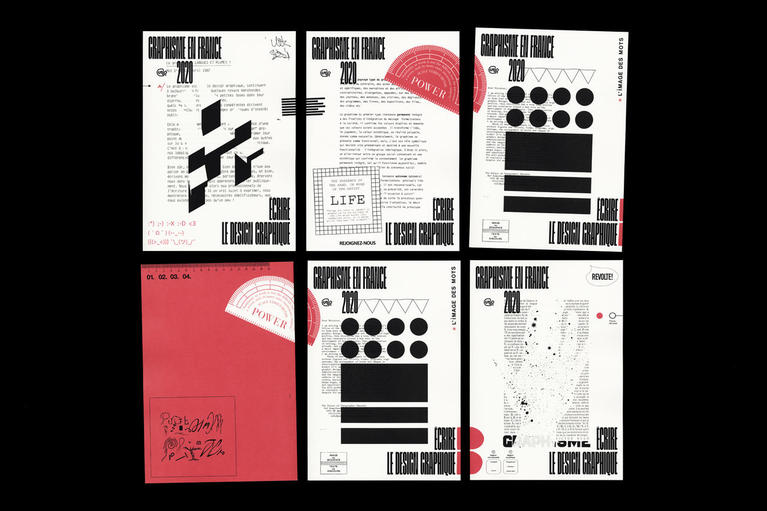 Writing is at the heart of the work of graphic designers. It is the matter that they compose, that they shape and that they structure with images.

In this issue we wanted to approach the notion of writing from a number of different angles. Writing as a means of expression, of affirmation and construction of the thinking of graphic designers, but also writing as a tool which allows one to structure and define this domain and its history and, last but not least, writing as reference and as a source of inspiration that continues to forge and nourish creation.

The graphic design of this issue has been entrusted to Théo Miller, 2016 graduate in printed image and type design at the École Estienne, who then pursued his studies at Celsa – Paris Sorbonne in order to deepen the links between writing and the tools of type design. His proposition structures the various contributions, with particular attention paid to reproducing the images in formats that make them legible. The issue has been composed using a number of different typefaces: Ductil by Marion Sendral, Grandmaster by Lucas Descroix, Grtsk by Ilya Naumoff and Benjamin Blaess, and Minotaur by Jean-Baptiste Levée.

This twenty-sixth issue of Graphisme en France has been accomplished in the highly unusual conditions of an unprecedented major health crisis that delayed its publication. A large number of graphic designers have been hard hit by the sudden halt in the country’s cultural and economic activities. Various types of aid have been put in place to compensate for this sudden slowdown in activity. The Centre national des arts plastiques, more than ever before, is working hand in hand with professionals, graphic designers, sponsors and distributors to support and promote the various aspects of these professions.