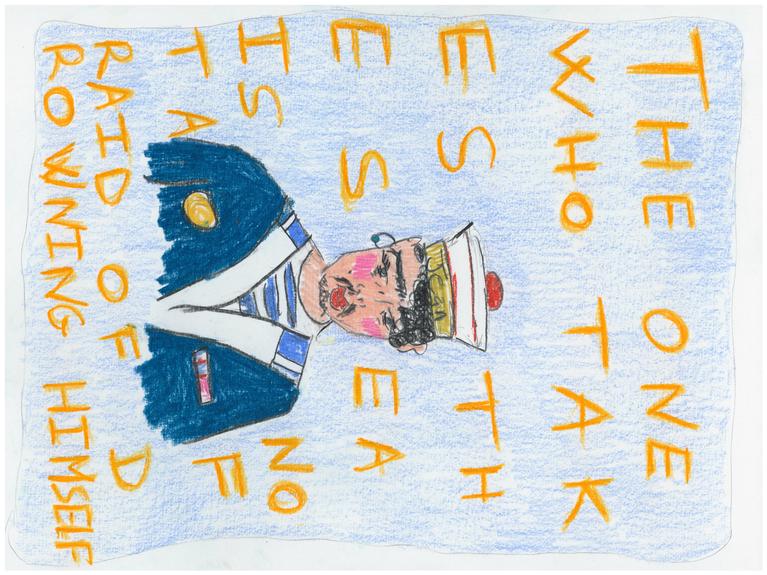 Praz-Delavallade is pleased to present Bunch of Queequeg, an exhibition of new drawings by Soufiane Ababri and his first solo presentation in the US. The exhibition will be on view 10 July through 26 August, 2021.

Ababri’s drawings confront the fetishization of men from the North African diaspora – and men of color throughout Europe and North America – as both destructive and fundamentally constitutive of the colonial psyche.

These latest drawings all belong to Ababri’s “Bedwork” series, which the artist completes in repose. It’s therefore fitting that they all engage with sexual politics. Here we see a white man riding atop an Arab man’s shoulders, holding his support’s severed head in his hand. Both men are turned away, so only the face of the undead Arab is visible, gazing back at his murderer with disappointment. The drawing recalls the Front Homosexuelle d’Action Révolutionnaire (Homosexual Revolutionary Action Front), founded in 1971 by Guy Hocquenghem and Françoise d’Eaubonne. A union between lesbians and gay men, FHAR was radical for its time in terms of gender, but men and women of color were still marginalized, when they were welcomed at all. As the group declared (in reference to the “Manifeste des 343 salopes”): “Nous sommes plus de 343 salopes / Nous nous sommes faits enculer par des Arabes / Nous sommes fiers et nous recommencerons”. The subversive charge of their claim is inseparable from its presumption of racial superiority. For what could be more transgressive than the colonizer being fucked by the colonized? While French troops were ravaging Algeria, white French gays were looking to get ravaged in the banlieues. The Arabs of their “revolutionary manifesto” were just a means to an end.

It is in his bed, lying down, that Soufiane Ababri makes his "bed works". In essence, he examines the ambivalence of a society that is criss-crossed by tensions that are not so much the reflection of its contradictions, but rather of its complementarity. His heritage lies in his own story, built up by layer upon layer of personal and intimate events. A lover of sociology, Ababri’s entire body of work plays with the idea of seeing: the artist observes a world that observes him in a form of introspection combining his own unique perception, shared representations and accepted social facts in an exercise that is reminiscent of Persian miniatures and their subtle play with what is hidden and what is revealed.

With the support of Centre national des arts plastiques.