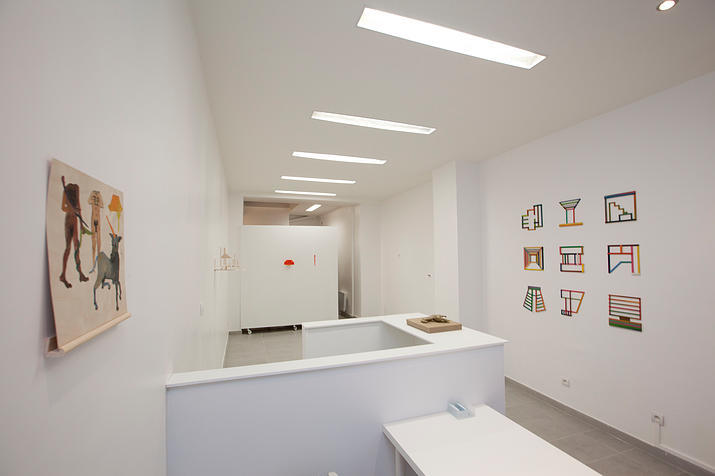 In the theater of spirits, this is what was missing to make a world – the saffron color of a coat in its felted light, which from the earth and its stones gives birth to a horizon of experience.

Before the imaginary costumed character, a spicy sweetness would roam through all that seemed forever frozen in the ruins of a glorious past, bringing in its folds the fibers of new stories. The old antiquated cloak from our festive days and our old comedies in the style of Tati is dead, that cloak oiled with all its possibles to find itself some comfort. On the thickness of its felt, the saffron coat proclaims itself as an antidote to our old world. I cannot see Ana but within a different genealogy of wayfarers, in the manner of Flávio de Carvalho and his tropical New Look, the need for a saffron coat to revisit Paris and shake the interstices in which we have been housing our dust for a long time.

To this Parisian wandering – bridges, walkways, monuments – Ana Mazzei combines the golden bricks of an upcoming restoration.  What she draws from the signs of time are many formal potentials. Her referents open themselves to other morphological principles, the curtains are promised as the theater of a play under construction. In a referential manner, her models and other figures would be the actors of this present time we need to seize, for here comes the moment suspended in its anachronism to which Ana invites us, covered in her Saffron coat.

She has completed a BFA in Visual Arts at Fundação Armando Alvares Penteado (FAAP) and a MA in Visual Poetics at UNICAMP. In 2011/12 she was a participant in the Independent Study Program at Escola São Paulo (PIESP) directed by Adriano Pedrosa. In 2013 she was selected for the residence at Cité des Arts  - Paris with a scholarship from FAAP. With a pluralistic practice that challenges and explores the structures, materiality and histories of representation and visuality, often in relation to the distinction between the theatrical and the real in contemporary life. Much of her work focuses on what once was visible but now cannot be seen. She is a member and founder of Teatro Facada.