The Cnap and Graphic Design 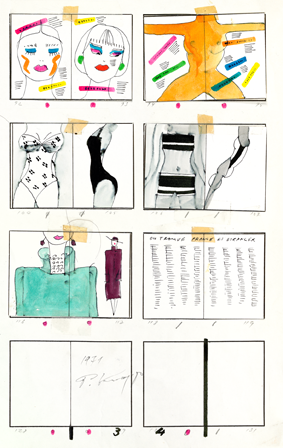 In all its initiatives and actions the Centre national des arts plastiques (the Cnap, or the French National Centre for Visual Arts) is attentive to its graphic design. In connection with its support of creative artistic work, numerous graphic design projects have received grants from the Cnap.

For all its communications and publications, this public institution regularly calls on graphic artists to create exemplary design, which comes into being through joint efforts and constructive discussions that also involve papermakers, printers and finishers.

The Cnap collection includes numerous projects publicly commissioned since the late 1980s; in particular, these include projects to create visual identities, signage or posters.

In October 2010, the first examples of graphic design were acquired with a view to enriching the national collection the Cnap manages on behalf of the French State. This includes a collection of original models and railroads by Peter Knapp; Logorama, a short animated film by H5 - François Alaux, Hervé de Crécy and Ludovic Houplain; and the entire Canal Plus visual identity by Étienne Robial. In 2011, all communication documents originating from the partnership between the theatre Nanterre-Amander and Labomatic (Pascal Béjean, Frédéric Bortolotti and Nicolas Ledoux), then with Pascal Béjean and Nicolas Ledoux, became part of the Cnap collection. All posters created for the Fête de la Musique summer music festival since its founding in 1982 have been donated by its organiser, the Association pour le Développement d'Etudes et de Projets (ADCEP).

Then come all issues of the journal Qui? Résiste, brought into being by Pierre di Sciullo, which have become part of the collection in their own turn. In 2012, the books Philippe Millot designed for Editions Cent Pages were acquired along with numerous objects demonstrating the process by which such works are developed, such as lay-flat bindings, deckled book blocks, decorative gilding tools, etc.

The last Cnap Applied Arts, Craftwork and Industrial Design commission in late 2013 acquired a collection of Frédéric Teschner posters and books, a collection of 100 Gavillet & Rust posters on the occasion of a joint effort with the FRAC Champagne-Ardenne for the FRAC's 30th anniversary, typographical character sets, Jean-Baptiste Levée's Panorama and Malou Verlomme's Camille, graphic charters designed by the Dutch graphic artists Experimental JetSet for the 104, the RMN and the Whitney Museum of New York and the complete health book collection Peter Knapp created for the World Health Organisation. These acquisitions preserve objects which are not normally of an everlasting nature, but which, historically speaking, have much to say about how their creators worked and the contexts in which they were made.